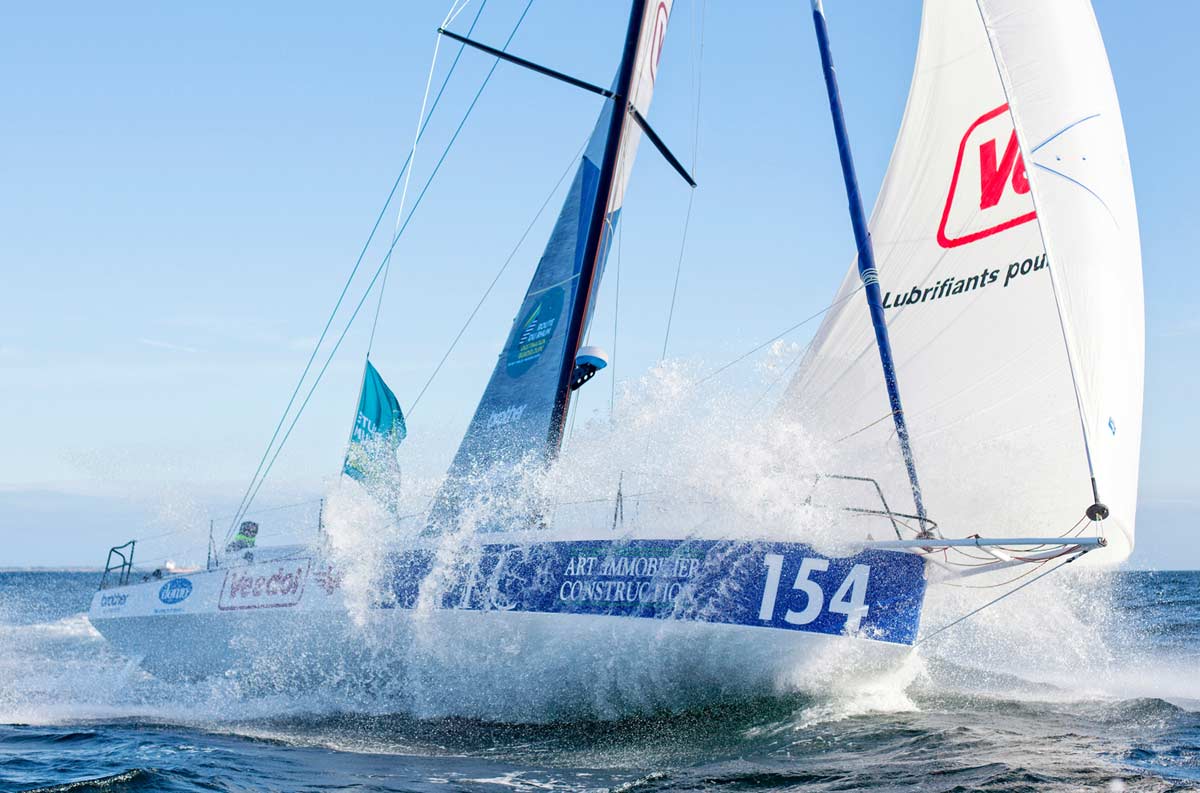 ABOVE ALL, WHAT IS A SPINNAKER ?

The spinnaker (or spinnaker) is a sail that is used downwind (when the wind comes from behind the boat).
It is a light fabric sail with a very rounded shape, hence its nickname “bubble ». The Mainsail and the genoa are flat sails which perform poorly in a tailwind. The boat is directing toward the wind, the apparent or felt wind is less strong and the boat will therefore go
slower. At last, the swell which usually follows the direction of the wind arrives from the rear of the boat and roughs it up (and its crew). The use of a spinnaker makes possible to restore speed to the
sailboat and therefore stability.

The names of the sails change over time, depending on the region and use. To simplify, there are 2 main families of headsails :
– Those which have an anti-torsion cable integrated in the luff of the sail. These are then so-called “Code” sails. There are all sizes and many names : Code J, code 0, …
– Those which do not incorporate an anti torsion cable and they are then spinnakers

ASYMMETRICAL SPINNAKER ACCORDING TO WIKIPEDIA :

« Of more recent development, but in the line of very hollow headsails (balloon jibs, precursors of the symmetrical spinnaker, and then become gennakers), the asymmetric spinnaker was first designed for racing : As the speed of the boats increases, the apparent wind swivels forward, so more efficient sails were needed with speeds close to the wind (specifically for multihulls, and certain fast monohulls : ULDB, Australian-inspired gliding dinghies…).
The asymmetric spinnaker’s tack is maintained by the bowsprit, attached to the bow of the boat. Easier to use, more stable, it is used from close reach to broad reach. It cannot be used to upwind, and performs poorly downwind. It is also gradually adopted by pleasure sailboats, especially due to the absence of outrigger operations : it operates almost like a classic headsail. »

THE OPERATION OF THE ASYMMETRIC SPI :

The spinnaker is the most complicated sail to set up, control and bring back to the deck. This is mainly due to the fact that unlike a mainsail or a genoa, the luff of the sail is not attached to a fixed part (the mast for the mainsail and the forestay for the genoa). 3 points must also be checked : the halyard point, the tack point (the part closest to the wind) and the sheet point.
For the most rounded spinnaker, it is finally necessary to use a pole which allows to move away and to stabilize the tack point.
It is therefore necessary to manage many parameters including the size of this sail which is by far the largest on the edge, the lightest and the most fragile. Some boaters have given up on the use of this sail and it is a pity since, as we explained before, it is by far the most efficient sail downwind. Boaters, sails and fittings manufacturers have therefore sought solutions to facilitate the use of this sail.

1-Send on the fly : The sail is hoisted as quickly as possible to the mast head and it is oriented and adjusted quickly by the crew. This is the technique most often used in crewed regattas. The method is fast and efficient as long as the spinnaker has been correctly folded and that each team member deals with one or more functions (halyard, brace, sheet, pole, steering, etc, …)

2-Sending on the fly with the help of scraps of yarn : The technique is identical but the crew will have previously tied the ends of the wool around the spinnaker at a regular distance. This technique allows to keep the spinnaker furled the time it is hoisted. The ends of wool break and free the spinnaker as soon as the sheet is operated. The wind rushes in and breaks them from bottom to top. This practice is now prohibited in regattas (and not recommended in cruises) in order to not participating in the pollution of our dear oceans.

3-The spinnaker sock : This is an accessory that keeps the spinnaker in a light fabric (the sock). A control rope system at the head of the spinnaker makes it possible to raise or lower this sock and to free or imprison the spinnaker to suffocate or free it. A very rounded plastic or fiber collar acts as a funnel.

4-The storekeeper : This more recent technique is inspired by the furling system of headsails (gennaker, code 0, etc, …). The furler must be fitted with a system which prevents uniform and symmetrical furling of the sail. Thus most spinnaker furlers have a swivel on the lower part of the furler or an adapter fitted with a swivel. During the operation, only the upper part of the spinnaker rolls up to gradually pull the entire spinnaker. This is the reason why these furlers are often called “Top-Down”. Importantly, a spinnaker furler is used with an anti torsion cable which makes the connection between the furler and the swivel (attached to the halyard). A turn of the continuous line wheel on the lower part must be transformed into a turn on the upper part. The anti torsion cable is therefore the drive belt for transmitting the forces but also a support on which the spinnaker is furled.

COMPARISON OF SOCKS VERSUS FURLER !

DISADVANTAGES OF THE SOCKS

DISADVANTAGES OF THE FURLER

ADVANTAGES OF THE SOCKS

ADVANTAGES OF THE FURLER

A spinnaker can be used without a sock or furler. It is an accessory that provides comfort, performance and safety. In both cases, these are also products that make it possible to democratize the use of the spinnaker, which remains an essential sail for going faster downwind.

Few sailors use the spinnaker furler because they combine it with equipment for cruising, but the advantages in relation to performance are nonetheless very numerous… starting with the elimination of unnecessary weight from a soaked sock at the masthead. To be continued…

KARVER AND THE SPI FURLER

Karver was one of the first furling manufacturers to offer spinnaker furlers.

The tack swivel is the central element of the system in relation to a standard
furler. Compared to our competitors, we have the lowest, largest and most
strong market.

A large swivel allows the use of larger bearings with more capacity of
load and less friction. We found that our swivel was up to 4 times larger
than other brands.

The new KTS adapter makes it easy to convert a standard furler into a spinnaker furler. The adapter can remain on the spinnaker and the furler is then fully available for other sails.

We have designed this adapter to reduce the vibrations that prematurely wear out your furler during unwinding.

One Step Ahead ! A step ahead ! By being the first to offer this product, we have
been also the first to gain experience and therefore the first to optimize our
products. Thus, for example, we have modified the design of our tack swivel in order to
improve the balance of efforts which makes the furler particularly stable during
fast processes.

Initially designed to help boaters tame their spinnaker, our spinnaker furler is
now also used on racing yachts and Super Yachts. During the last regattas
Super Yachts in the West Indies, you can see sailboats over 50 meters using a spinnaker furler with sails of several hundred square meters.