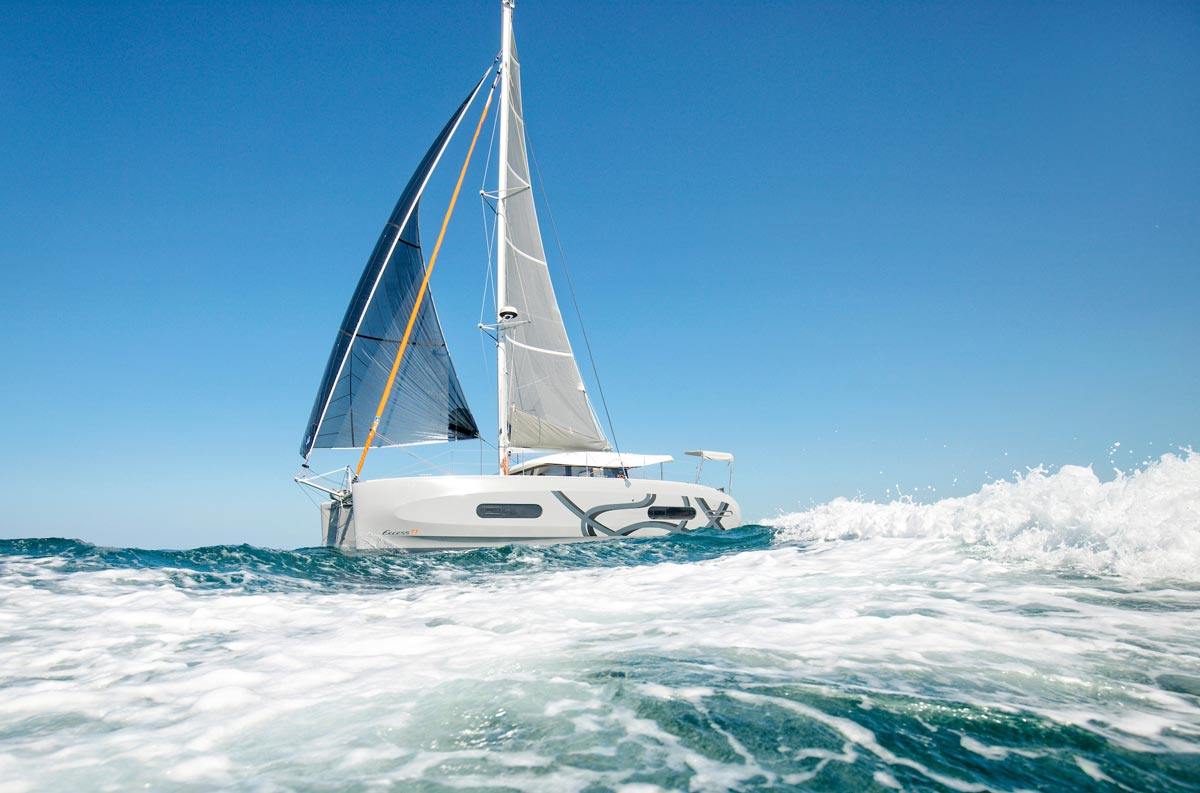 DIFFERENCES BETWEEN A REEFING FURLER AND A FLYING FURLER.

During boat shows, several boaters came to ask us for information on the differences between a reefing furler and a flying furler.

REEFING FURLER OR FLYING FURLER : IN BOTH CASES, A SYSTEM TO MAKE NAVIGATION SIMPLER :

The oldest boaters or those who sail on small units or traditional units know this : the reefing furler or the flying furler remains an optional accessory. The traditional method of setting up a headsail is to attach it to the forestay with snap shackles and then hoist it all up. Disadvantage : The sail must be stowed after each navigation and cannot be easily trimmed (reduce its surface).

The reefing furler or the furler allows above all to avoid this chore by a clever furling system.

The reefing furler has been installed as standard on all sailboats for many years now, with the exception of certain racing sailboats. The furler remains an accessory offered only as an option and is often offered in a pack with an additional sail. Often a gennaker.

1st FUNDAMENTAL DIFFERENCE : THE REEFING FURLER IS INTEGRATED WITH THE STRUCTURAL STAY
The easiest point to understand is that a reefing furler integrates the main stay of your sailboat (the cable that holds the mast towards the front of the sailboat)
If you accidentally remove the top or bottom pin of your reefing furler, your mast will soon fall backwards !

Regarding the flying furler, it has no structural vocation and you can therefore remove it or replace it without worrying about the hold of your mast.

The reefing furler being perpetually in place, the main headsail is therefore also perpetually stationed there. It is possible to lower this sail for repair or wintering, but it does require a little time and effort. The generic name of this sail is the genoa. If you’re interested, another article discusses the different types of headsails.

2nd FUNDAMENTAL DIFFERENCE : THE REEFING FURLER IS COMPOSED OF TROUGH PROFILES AND ALLOWS TO REDUCE THE SAIL
Whatever the brand of your reefing furler, you will always find the same
elements :

The furler is only made up of a drum and a swivel, but without an aluminum profile. The connecting piece is a rope or an anti torsion cable integrated into the luff of the sail and installed by your sailmaker.

On a reefing furler, one turn of the turret (bottom) always involves one turn of the swivel (top). Whatever the conditions, aluminum profiles will systematically transmit an applied force from the
down to the top. This is what allows a uniform furling of the sail.

For a furler, the force transmission element is the anti-torsion cable. As efficient as it is, this rope or textile cable will never be as efficient as an aluminum profile (stainless steel, titanium or carbon). This is the main reason which explains why it is possible to take a reef in your genoa with a reefing furler and that it is impossible to do it with a furler.
A furling sail can therefore only be used fully extended.

Another particularity of the furler : the furling system is mainly a continuous line wheel fitted with a looped rope instead of a single line.
Several reasons for this :

1- The furler must remain light and compact equipment for
taking advantage of a maximum sail area and be easy to install (weight and bulk are 2 choice criteria).

2- It sometimes happens on a reefing furler that you miss a few turns of the rope to finish furling your sail, which requires you to intervene quickly on the foredeck. This phenomenon will recur even more frequently when a single line is used on a furler.
Some deck plans require this configuration. This is not a major problem, but it does require a bit of monitoring and anticipation.

SPECIAL CASES : THE TUFF LUFF AND THE STRUCTURAL FURLER

Some sailing racing boats or some high-performance boats are looking for the lightest possible systems to avoid unnecessary weights in the upper parts of the mast.

The Tuff Luff is a one-piece plastic profile on which is installed a sail with a bolt rope. The forestay passes through one of the chutes. Be careful ! This system does not allow furling a sail.
The structural furler (or stocker) is an improved and secure furler that integrates the forestay but does not use aluminum profiles. This system makes possible to have a set extremely
light and allows the sail to be furled. Disadvantage : it is still not possible to partially use it.

A FURLER FOR AN ADDITIONAL SAIL

All new production sailboats are usually delivered with a mainsail and a furling genoa. These sails are intended to be in place for long periods and are also protected by anti UV fabrics.
Since the reefing furler genoa is by definition always in place, a furler can be used to furl an additional sail.
A furling sail is usually stowed after each use. It is for this reason that we sometimes speak of flying sails. In practice, the sail can remain in place for several hours or several days.

In absolute terms, we could go around the world with a simple reefing furler genoa but in many cases, this one cannot be perfectly adapted.

It is to respond to these problems that both boaters and runners use additional sails. In all cases, it is either a search for speed, or a wish not to use a partially rolled sail and in all cases to always favor
the use of a sail rather than a motor in order to go faster from point A to point B.

WHAT SAILS ARE FREQUENTLY USED WITH A FURLER ?

For sailing racing boats, all sails (or almost) are on furler and there can be a lot of them ! However, there is no need to have several furlers. Only one can be used for several sails if it is sufficiently sized to be used with the most powerful sail (staysail or code 0 usually).

For a cruising sailboat, the most frequently used sails with a furler are (in order) :

As we explained before, a furler is used with an anti torsion cable. Each end of the line must be fitted with a thimble suitable for its furler. It is these thimbles which are fixed in the furler and the swivel.

All sails can be furled as long as your sail is equipped with an anti torsion in its luff.
The spinnaker is the only sail that does not include an anti-torsion cable. For a spinnaker furler, the cable is necessary but it only serves as a furling support. It is therefore external to the spinnaker.

Karver is a worldwide benchmark for racing, cruising or Super Yacht furlers. To date, Karver does not manufacture reefing furlers.

Regarding furlers, we have really revolutionized the market by offering many innovations : the captive fast pins, the quick installation system of the furling line, patented high load bearings and more recently the automatic locking system which allows the furler to be blocked without having to lash the furling line.

In 2021, we launched a new range of furlers. The 3rd since our creation. This new range is particularly innovative and incorporates, among other things, a Kevlar carbon continuous line wheel.

The furlers for flying sails are available in 3 versions :

All models can be fitted with our KTS adapter which allows you to furler an asymmetric spinnaker.

The KFX model corresponds to our structural furler.

In addition to these ranges, our flagship product is the KFH : a unique system on the market which integrates a swivel and a hook in the same product.

Continue to visit our site to find out more…